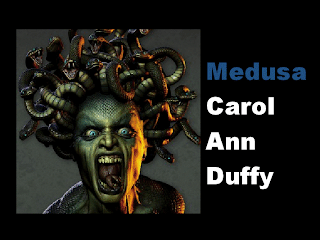 This post follows An Intro To Everyday Metaphor, in which I outlined my belief that teaching simile/metaphor was pretty pointless unless students understood just how ubiquitous such figurative language was. The lesson included in that blog was designed as a precursor to the two included here.

The first lesson is an introduction to metaphor in poetry, drawing heavily on two poems from the Relationships cluster of Moon on the Tides: Praise Song for My Mother and Nettles. It obviously makes sense to use poems from the anthology - not least because they're both so rich in metaphorical language relevant to young people growing up. The lesson is designed to encourage pupils to interpret and react to the poems themselves - a part of poetry teaching i've seen disregarded far too often.

The second lesson focuses on Carol Ann Duffy's Medusa. It asks the pupils to analyse the poem's use of metaphor, their effectiveness and whether or not Duffy uses Medusa as an extended metaphor or whether she is writing in her voice - there's a task asking the pupils to re-write parts of the poem with no figurative language at all. Hopefully this will help them arrive at a conclusion by demonstrating the strength of Duffy's technique.

As always, i would welcome any constructive feedback. I'm reading voraciously and taking advice from various sources on how to improve my planning - hopefully by the time September comes around i'll have absorbed oodles of useful hints and tips and be thinking and preparing on autopilot!
Posted by The Author at 10:37