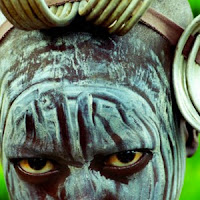 As i'm sure many teachers do, i spend inordinate amounts of looking around for inspirational lesson ideas and wondering how i can transform everyday instances from my life into whizz-bang lessons which link learning with experience in a truly memorable form. Today, i watched a film which did that around 25 times in 100 minutes.

That film was Samsara, an extraordinarily visual documentary crammed with evocative images, eery sequences and arresting ideas. It's a documentary with no dialogue whatsoever. Instead, music links individual scenes from around the world which show everything from religous worship to factory assembly lines to massed martial arts demonstrations. Shot on 70mm film over a period of five years, it's a striking and thought-provoking piece which could have dozens of applications for educationalists.

Often the film's focus is on juxtaposing growth/decay, wonder/disgust, life/death, etc. That's a lesson in itself, illustrating perfectly why juxtaposition works and setting the wheels in motion for some original writing. There are also some wonderful characters whose stories could be explored, amazing landscapes and vistas to inspire writing on setting and some excellent sequences to inspire debate on issues such as vegetarianism and/or animal cruelty.

There's plenty here for teachers of other subjects too: Geography, RE and Citizenship could all draw heavily on passages and scenes of natural phemonena, the nature of devotion and numerous moral issues. Each scene is only a few minutes long too - there's no need to lose half a lesson to showing a clip.

Of course, it'll be a while before Shantaram appears on DVD, but the moment it does i'll be buying a copy. The value of the moving image is huge and it's rarely been captured so beautifully or powerfully. And it beats jerkily buffered YouTube clips any day.

Blogger won't let me embed the trailer here for some reason, so click HERE to go somewhere else and watch it instead!
Posted by The Author at 14:24